Another Kind of Graphene Bond: A² - Nixene Publishing

Another Kind of Graphene Bond: A² 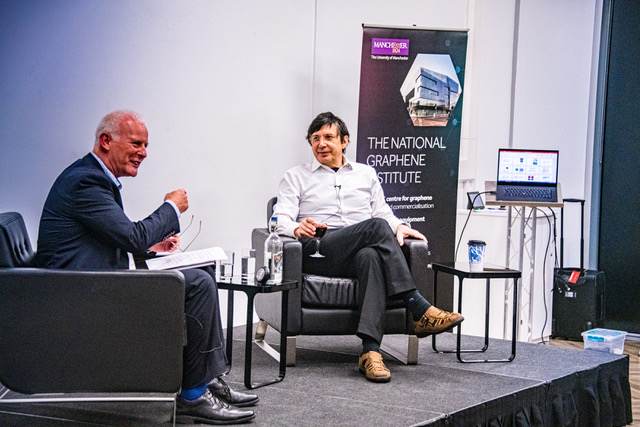 Adrian Nixon and Andre Geim formed another graphene bond as they regaled The National Graphene Institute audience with information, explanations and stories surrounding the discovery, research, development and commercialization of graphene.

Manchester (UK) — The University of Manchester is known for firsts in the graphene world – a most appropriate location for the Nixene Journal’s first interview of Professor Sir Andre Geim. Editor Adrian Nixon’s extensive preparation was evident, doing what he does best – providing clarity from complexity with insightful queries and memorable reflection. Fondly called Captain Graphene, Nixon was at ease on stage with one of the scientists who isolated the single atomic layer of graphite known as graphene and rarely grants interviews. Their camaraderie facilitated an enjoyable repartee, captivating the audience in a uniquely relaxed yet undeniably scientific atmosphere.

As a Top 10 Researcher in the World, distinguished by the Nobel prize for Physics and the Ig-Nobel prize in 2000, Geim offered insight, expertise and often humorous opinion reflecting on graphene’s fifteen years since discovery. He admitted his initial paper was rejected twice before being published and recognized.

When Nixon asked, “Why do you think graphene has such prominence?” Geim spoke of its extensive superlative properties and position as “the first material ever with no thickness.” He went on to say the discovery “established a new class of materials, completely hidden just fifteen years ago.” Speaking of graphene’s importance, “in the history of the human race, the Age of 2D Materials is next.”

“Graphene is the quickest to jump from research’s lap into the consumer market.”  The commercialization process would be even more swift, but “3D tools slow the 2D age.”

Within the first five years, scientists knew everything about the properties of graphene, then the next stage of research revealed “absolutely astonishing” discovery. “Encapsulated graphene is a system (which is) cleaner than any other, though we do not have commercial application for it yet.”

Graphene has reincarnated itself every few years. About a year ago, people twisted graphene just a little. Its “infinite combination with other elements gives PhD students plenty to study with until they retire!” Geim assured.

Although primary focus has been on the hype and now reality of graphene, and its ability to change industries for the better, Geim also qualified its prominence saying, “Graphene is in the spotlight now, but its brothers and sisters are waiting in the back and will move forward slower.”

Further discussing the way graphene impacts industry, Geim pointed out, “To raise the quality of most materials requires adding 10% of another material. However with graphene, adding a slight amount changes the material significantly because graphene is inert and chemically more stable than other materials.”

Though Nixon asked exceptional scientific-based questions, he also invited Geim to share about his personal approach to research. “I don’t like to work in the crowd” Geim confessed. “(I am) always looking for new ground, more comfortable at the edge of what is known.”

Nixon mentioned the bi-layer twisted graphene asking, “Do you think that merits future research?” leading Geim into a thought-provoking response about what he called an interesting scenario.

When asked about the global landscape of research, Geim said, “The most visible developments are certainly China – some companies are profitable already. I know there are developments in Europe and England. In America, it is estimated very little development but one company has been using graphene for a couple of years.”

“I was impressed recently with a couple of the guys – full tenured professors in Italy for 15 years (who) quit the university and left to begin their own graphene company. Quite impressive, a most promising sign, I would say.”

When asked, “Where are the hot spots?” Geim quipped, “Que sera, sera…” before adding that graphene has “moved from tabloid to journalist.” He emphasized, “We have to celebrate what we have now.” He touched briefly on Manchester’s inov-8 graphene-enhanced shoes, before moving along to LCD screens and concluded by saying we “can’t expect to switch from silicon to graphene chips quickly.”

The comprehensive message traced how swiftly graphene has moved from discovery, through research and development and is now in the early stages of global commercial application – but the commercial side won’t change overnight. Importantly, according to Professor Sir Geim, The Age of 2D Materials has begun with graphene leading the way into endless combinations, keeping researchers busy for decades to come.