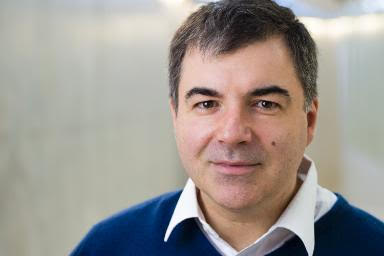 The event overview is followed by his memories of the Hackathon, as told to Debbie Nelson, Nixene’s Contributing Editor and Project Manager.

Kostya provided final approval of this article, so you can be certain of authenticity.

Design, Prototype, Pitch! The Graphene Engineering Innovation Centre (GEIC) in Manchester was abuzz with excitement. Teams of students engaged in STEM-related studies each received a kit of supplies identical to the other teams’. By the time 24 continuous hours of collaboration, design scientific brainstorming and design work concluded, an assortment of graphene-based prototypes would be ready to be pitched to an esteemed panel of judges. Many of the participants were students of Professor Sir Kostya Novoselov, who relocated to the National University of Singapore earlier in the year.

The 2004 Nobel prize winner in Physics, who co-authored the discovery of single layer graphene from graphite, returned to visit his former students at the University of Manchester. The Hackathon provided a perfect opportunity for him to stop by and experience the students in action. The place was buzzing with energy and it was nice for him “to see those sparkly eyes’ focused on their projects.

The GEIC is relatively new – just celebrating its first anniversary in December 2019, and everyone was confident of the interest in graphene locally and globally, but it was difficult to know how to measure its effectiveness. Kostya believes the graphene interest was confirmed by the excitement of the people at the 1st Annual Graphene Hackathon.

The Hackathon was held to maximize the impact graphene can have in real world applications by putting graphene in the hands of teams of students who might never otherwise have the opportunity. The goal of the Hackathon is to break skill silos, cut R&D timescales and remove conventional barriers to commercialization by rethinking product development, unlocking the entrepreneur in everyone and providing a dynamic space for rapid learning, failure and innovation.

As a hands-on experimentalist, with many graphene stories, lab work with Kostya begins with basic tasks, progressing with increasing complexity and always very technical. His students practice making something from scratch, spending hours in clean rooms – creating. This was very much the DNA of their lab.

Asked how it felt to once be a student, now the professor returning to see his students, his reply was not to get ahead of things – they are students, and he is a student, too. Always fascinated with making things with his own hands, Kostya witnessing the students creating masterpieces is very close to his heart indeed.

When he was a student himself, his school lab was a collection of bits and pieces. So, it was interesting at the Hackathon to see what people can invent, creating something from nothing. All the projects were incredible, and the teams amazed him at how enthusiastic and hard-working they were.

To Kostya, it would be very difficult to say which would be considered the best amount of time to challenge students in a competition like this. Twenty-four hours is extremely short and the students are under a lot of pressure. But every team is in the same boat under the same conditions. No one expects a glossy result. What is expected, is to hear about exciting ideas around design which are prototypical. But to determine how much time to accomplish this, where do you stop – a week, a month? The Graphene Hackathon weekend of 24 hours works well.

What he would like to see is a way for the teams to continue developing the projects once the competition ends. Teams – which are well balanced with skill and whose prototypes exhibit reasonable commercial potential – should have assistance to turn their projects into start-ups. He encouraged organizers to bring in entrepreneurs who have the ability to sponsor such endeavours, in addition to inviting the scientists.

Kostya will try to pop in for this year’s Hackathon, if his schedule allows. He emphasized several times how exciting it is to feel that buzz. He wishes everyone luck and says thank you for the grandiose excitement which inspires him.

“Students will be working on something new, and this new can change the world!”

Kostya has deliberately shifted his focus. A change of venue was essential to expand and move on to further research. At Manchester, everything revolves around graphene. The material covers a vast area with much more discovery in the future. When asked if he sees any other material which he thinks might be superior to graphene.

“That’s the beauty of science – you can’t predict it.”

Extra:
When asked about his love for Chinese art, and whether he feels a nano-art show would complement the Graphene Hackathon, Kostya’s response was inspiring and generous.

“I praise creativity and I do not separate art and any other field. All are equally exciting. If someone wants to use my scientific slides and my paintings as inspiration, I would welcome that.”