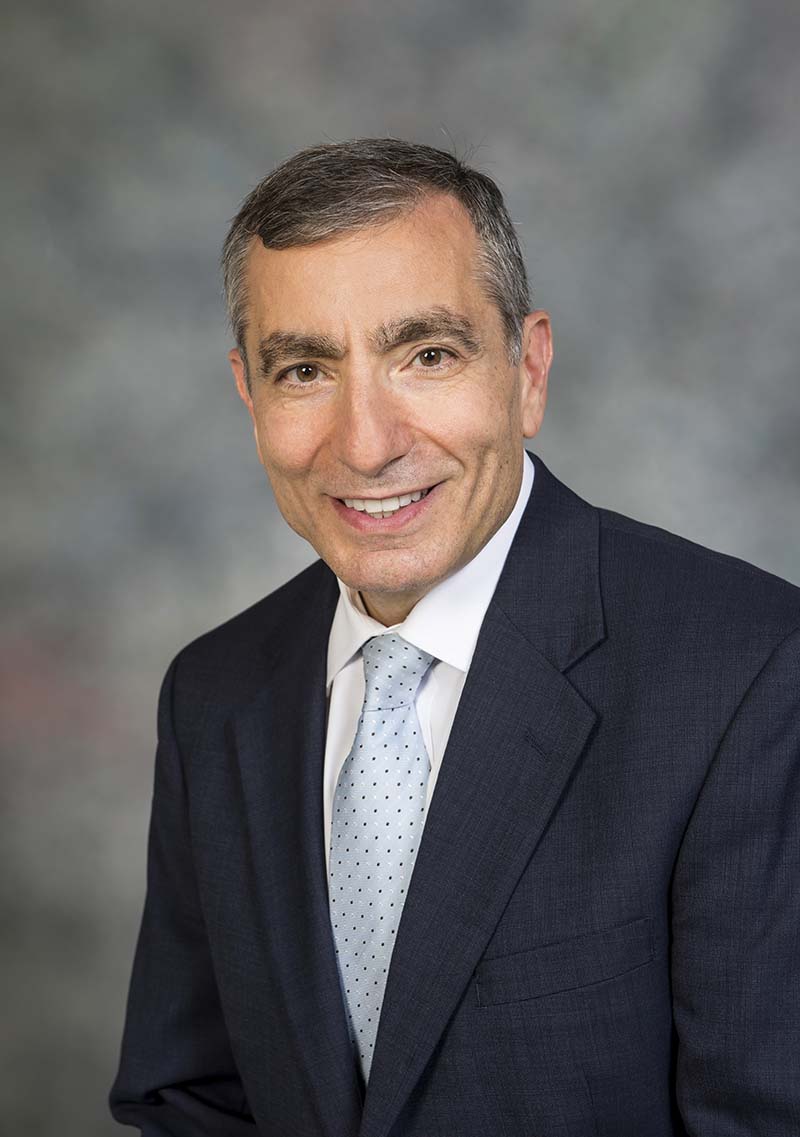 Professor James Tour is the leading graphene researcher in the USA. His team has made some exciting discoveries in recent years. He set some time aside to chat with us. This is where the future begins, read on to find out more from our conversation.

James and his team have been working on so many things it is easy to become lost in the successes his team has created. We decided to start with the chemistry and approach the body of graphene work from the point of view of the three main categories of new materials he has been working on. Graphene Quantum Dots, Laser-Induced Graphene and Graphene Nanoribbons.

Quantum dots are nanoscale materials that absorb ultraviolet light and then fluoresce in the visible part of the spectrum with many colours that are dependent on the size of the material. They have a wide range of applications from security to medical imaging. Quantum dots have been made from heavy metals such as lead and cadmium and these heavy metals are toxic and so increasingly undesirable.

Graphene quantum dots have a similar response to traditional inorganic quantum dots with the added benefits of being non-toxic. GQD were originally made in 2010 by cutting graphene nanoplates derived from graphite [1]. James mentioned that these GQDs were very expensive, costing over $1M per kg.

How are graphene quantum dots made?

What can graphene quantum dots be used for?

Anti-Counterfeiting: High-end luxury goods such as ladies’ handbags are being marked discreetly with graphene quantum dot identifiers that can only be read with specially designed equipment.

Agriculture: In North America some states have legalised cannabis production and use. How to tell legally grown cannabis from the illegal? It turns out that graphene quantum dots can be added to the irrigation water used for growing the plants. The GQDs are taken up by each plant and incorporated in its structure. This means the leaves and stems contain the unique barcode; it not only validates the product as legal but also identifies the source.

Energy: The USA has reduced its dependence Middle Eastern oil imports with the development of hydraulic fracturing (Fracking) [3]. Fracking requires large amounts of water and there is controversy that fracking water has contaminated public water supplies. Graphene Quantum Dots are being added to the water used in fracking and these can prove whether contamination has occurred and also pinpoint the well source.

In 2014 James Tour’s team published research that showed graphene could be created by burning carbon containing materials with a laser [4]. This Laser-Induced Graphene (LIG) has become a field of research in its own right in the past five years.

How is laser induced graphene made?

LIG is made by shining an infrared laser on a surface that contains carbon. The energy in the light converts the sp3-carbon atoms to sp2-carbon (graphene) atoms by pulsed laser irradiation. The resulting LIG exhibits high electrical conductivity. 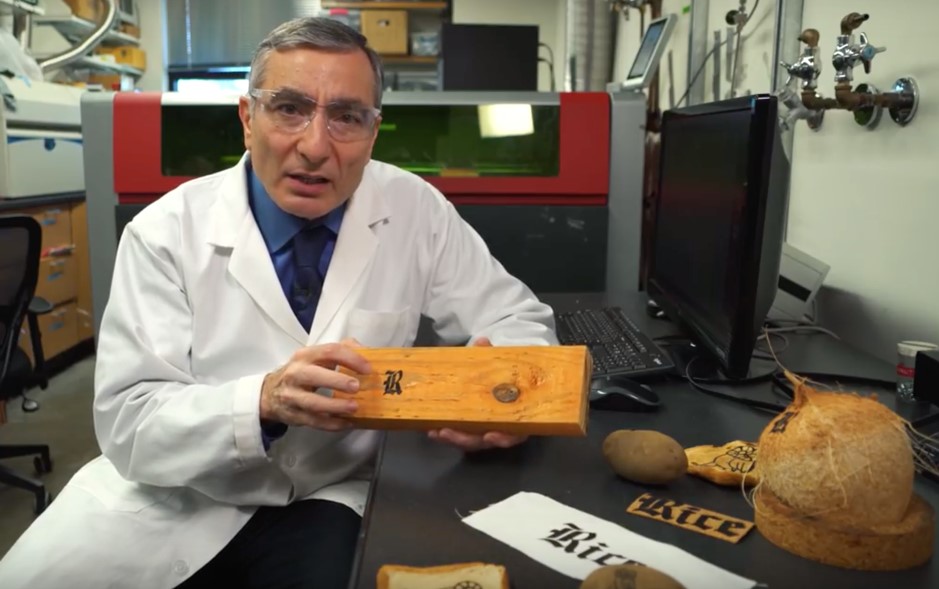 What can laser induced graphene be used for?

Antifouling membranes: Porous membranes coated with LIG prevent biofilms from forming on their surface which means they are inherently antifouling.
Furthermore, pass a current between two LIG coated surfaces and they generate hydroxyl radicals that actively kill bacteria and fungi in water.

Electronics: 5G antenna have been made on polyimide and James’ team is developing a roll to roll process for manufacturing these.

LIG strain sensors have also been made and these can detect strains over a very wide range and from very small to large forces with one thousand times the sensitivity of comparable sensors.

These are just some examples of the uses that have been found for LIG. James’ team is finding new uses all the time as this is an active area of research. The field has grown to the point where 1-2 articles per week are appearing in the science and engineering literature on LIG-based devices.

In 2009 James Tour’s team discovered a method to create graphene nanoribbons (GNRs) [6]. They started with carbon nanotubes and chemically unzipped them longitudinally using concentrated sulphuric acid and potassium permanganate. This created graphene oxide nanoribbons so by adding reducing agents or just heating them to 200°C, they were able to reduce these creating long thin ribbon like strips of graphene. Or they can reductively split the carbon nanotubes so that the GNRs form directly with no need for a subsequent reduction step.

Over the past decade James’ laboratory has learned how to add functional groups to the edges of the graphene nanoribbons to improve their performance for different applications, some of their findings are truly astounding

What can functionalised graphene nanoribbons be used for?

Aerospace: GNR coatings heat up when conducting a current and have been used to make spray on de-icing coatings on radar domes for aircraft helicopter rotor blades. The GNR coating can be overpainted with commercially available varnishes to improve its wear resistance without affecting the de-icing performance

Food and drink packaging: Transparent plastic bottles used for fizzy drinks are made from polyethylene terephthalate (PET), however, the carbon dioxide leaches through pores in the plastic and the drinks become flat with time. The packaging industry has learned to add up to 28% nanoclays to reduce the porosity. This helps prevent carbon dioxide loss but not the ingress of oxygen which spoils the contents making them taste bad. The team in the Tour lab has found that adding just 0.5% graphene nanoribbons to the PET plastic reduces the ingress of gasses by over one thousand times. This will improve the shelf life of foods and drinks in PET packaging and reduce waste.

Healing spinal injuries: This is the most amazing aspect of James’ work. The team functionalised graphene nanoribbons with polyethylene glycol (PEG) at the edges to create PEG-GNRs with improved biocompatibility.
The team found that nerve cells would grow and reconnect along PEG-GNRs. So, they conducted an experiment where a rat had a spinal cord surgically cut completely in two and that paralysed it from the neck down. Then they introduced the PEG-GNRs into the injured region. They found that the nerve cells started to regrow within 24 hours and the rat was able to walk perfectly again within two weeks. This work is being continued by a spin off company based in Israel called NeuroCords Ltd. to help people that have suffered spinal cord injuries. A video of the restored rat can be seen below:

I found the interview with Professor James Tour fascinating and enlightening. Over the past decade his laboratory has demonstrated a consistent ability to drive innovative products from the rapidly evolving field that is graphene. His work is truly astounding and still continues. If I were a panel member for the Royal Swedish Academy of Sciences James Tour would get my vote for a Nobel Prize without hesitation, his work is that impressive.